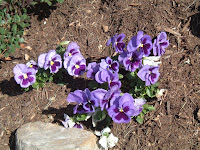 Thought I'd post another one of our beautiful flower pictures. They are continuing to survive even though we've had some incredibly weird April weather. Last Sunday, it snowed. This Sunday, it was 80 degrees! Let's just say that I liked the warm weather much, much better.

Read over the latest crop report from the United States Department of Agriculture (USDA). Tennessee has suffered some major damage from the last round of record-breaking cold weather. Some farmers lost their entire crop and have had to re-plant, while others just lost only a portion of their fields. Corn seems to be one crop that has needed the re-planting.

Interesting enough, we are still on pace with normal progress for this time of year, despite the record-breaking cold during the Easter weekend.

Here in Cookeville for the week of:

Have a beautiful rest of the week...I'll be snapping more pictures and will have them posted here....Stay Tuned!