****7:39 AM UPDATE****
Putnam County school officials have decided to go ahead and close schools today (Monday, February 2nd, 2009) due to snow and road conditions.  Originally, they were going two hours late. 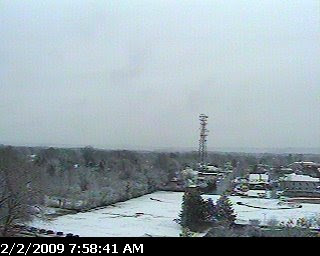 Nearly 2" of snow has blanketed the Upper Cumberland region of Tennessee overnight.  It is very pretty!  Should have pictures up soon for you all to see.  We go from a high of 60° yesterday to snow...quite amazing.

Temperatures will rise in to the mid 40's this afternoon.  Schools in several counties, ours included, are running on a 2-hour delay.  Some, like Jackson and Overton, are closed.

Takes a bit of time for news to travel! :) Channel 2 had us closed and 4 and 5 just updated to closed status a few minutes later. :)

Looks like your child is home with you Paul!

Yep, that he is. We just finished making a snow groundhog in the backyard. No chance of him seeing his shadow, but I think only the 'hog in PA is official.

You are so lucky. We want snow bad and can seem to get any. We visit gainesboro alot, my in-laws have an old farm place there.