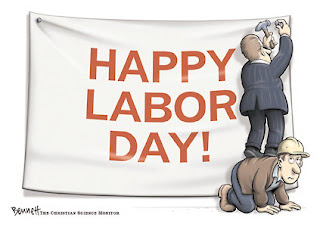 **CRAZY LABOR DAY WEATHER**
It was a wild end to our Labor Day holiday. Thunderstorm winds damaged trees in southern DeKalb County, TN..which is about 15 miles from our location. We had seen heavy rain for the past couple of hours on the houseboat. Lightning danced all around us for those couple of hours.

Around 6:45 pm on Monday, a Tornado Warning was issued for a county just to our south. Doppler radar indicated a severe thunderstorm capable of producing a tornado.  Sixteen minutes after the Tornado Warning was issued, a funnel cloud was spotted by a resident just to the southwest of McMinnville, TN. The resident called it in to the local Sheriff's Department. We'll check reports tomorrow to see what, if any, damage was reported and confirmed.

Just before sunset, an incredible rainbow made it presence known right by the houseboat. You can view it by going here.

When I arrived home this evening around 8 pm, I discovered just .15" of rainfall in the CoCoRaHS rain gauge. That was a disappointment as I estimate we had around 2" (or more) at the lake.

At this hour (11:15 pm), police in Pulaski, TN (near the Alabama border) report standing water in the roadway in the middle of the city.

*REST OF WEEK WEATHER*
Expect dense fog (an advisory is issued) overnight and in the first several hours of daylight. After that, we should see only a 20% chance of isolated showers and thunderstorms with a high around 82°. Partly cloudy skies and 62° on Tuesday evening. Repeat that forecast for the rest of the week...slight chances of rain and highs in the lower 80's with lows in the lower 60's.