***2:15 PM UPDATE***
The Winter Weather Advisory has been cancelled due to precipitation of the frozen variety not materializing. It has, however, been replaced with a Special Weather Statement which warns of slick roads due to falling temperatures and the threat of precipitation overnight. We could still see up to 1" of snow by morning.

Here is a snow photo from Scott Davis of Crossville. Scott operates a web site called THE MISSING that helps locate missing children. Keep up the great work Scott! 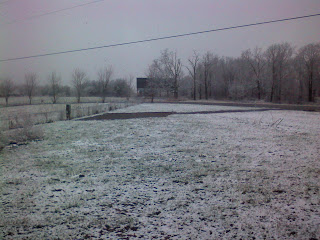 **11:55 AM UPDATE**
Just reviewing the LATEST, LOCAL FORECAST and our friends at the National Weather Service are sticking to their guns with snow chances. Kent from Monterey has a nice snow pic on his blog and received a text of snow pic from Scott in Crossville. I will try to get it posted soon. My thoughts are those areas will continue to see snow while we are just seeing a cold, dreary day. Oh well, sometimes we get snow and other times we don't. This is just one of those times. Temperatures have risen steadily, but slowly, during the morning. They peaked a little earlier at 38° and have retreated a degree in the last fifteen minutes. We expect to drop to around 30° overnight. What precipitation that does fall overnight will have a chance to stick.


WHAT HAPPENED?: Many of you wake this morning, in Cookeville, wondering what happened to the snow that was falling and accumulating yesterday evening. Here is how it all took place. Temperatures began to rise slowly beginning about 10 pm last evening through this morning. We went from 32° to a current reading of 35°. The snow that had accumulated was melted away by the rise in temperature AND a change from snow to rain overnight. We picked up another .13" from 10 pm until just now (7 a.m.) along with the .80" we received since 7 a.m. on Friday.

SATURDAY'S OUTLOOK: We are still under a Winter Weather Advisory as a series of upper level disturbances will swing through our area. Temperatures may rise a few degrees from the current temperature of 35° at 7 a.m., but will fall during these snow showers. Expect a light dusting right here in Cookeville with a possibility of an additional inch in the higher elevations of the Cumberland Plateau area to our north and east. Tonight, we should seeing snow continuing, but tapering off to flurries, and Sunday will see a slight chance of snow in the morning with highs in the 30's.

I've seen a 3.8" snow report from Grainger County in East Tennessee. I know there are higher amounts and will continue to look for reports. Nationally, up to 2 feet will accumulate near Washington, D.C. WOW!

Finally, with yesterday's near inch of precipitation, we're up to 75.02" for 2009. This ranks as the second most ever in Cookeville and just 1.44" away from setting the all-time record. Without a major rain event in the next 12 days, we'll fall just short.

Read my latest weather post at Examiner.com website, I am the Nashville Weather Examiner.
at 7:22 AM
Email ThisBlogThis!Share to TwitterShare to FacebookShare to Pinterest
Labels: forecast, snow