*JUST PLAIN HOT*
We had the warmest weekend since last October as temperatures hit 82.0° on Friday, 87.8° on Saturday, and 86.0° on Sunday. Records were set all across the state and we tied a record on Saturday that was set in the 1970's. We'll end up a few degrees short on Sunday's record of 90°.

*STORM CHANCES TODAY*
The first of the week is showing a potential severe storm outbreak for today as arrival times are expected to be early afternoon for Nashville and late afternoon for the Cookeville area. You would be well advised to keep an eye out on the weather and we'll do our best to keep you informed as these storms move in. 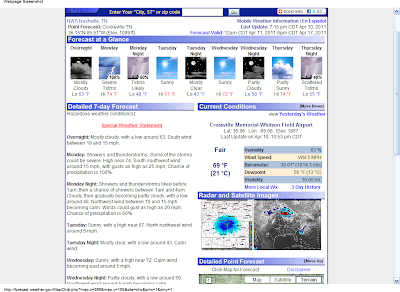 *GET THE RIGHT INFORMATION...FAST*
Remember to keep up via local radio (that actually does local weather cut-ins) and local television stations, such as (from Nashville) Channels 2, 4, 5, and 17. Locally, in Cookeville and parts of Putnam County, you can tune your car's radio into 1650 AM and hear the National Weather Service broadcast.

We are expecting a warm week after today's storms! REMEMBER, stay weather aware!


Weather History today from Joe at WeatherForYou.com
Joe is having some health issues and I wish him well!
------------
Join me on:
Facebook
Twitter
LinkedIn
My Google Profile
at 5:30 AM
Email ThisBlogThis!Share to TwitterShare to FacebookShare to Pinterest
Labels: forecast, severe weather