Cookeville has set a rainfall record for the month of April. The old record was 8.91" from 1920. So far this month, we've recorded 12.47", including 5.08" in last two days.
Quite a map tonight from the National Weather Service. We are under a Flash Flood Warning for Cumberland, Dekalb, Fentress, Jackson, Overton, Pickett, Putnam, and White Counties in middle Tennessee. 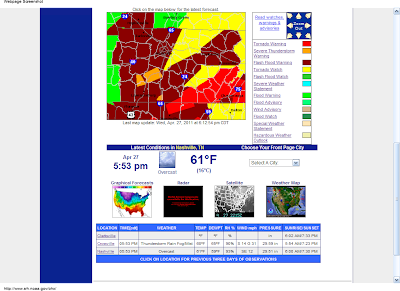 Add to that, a Tornado Watch until midnight. We've measured 3.97" since midnight with all of that falling actually since just before 7 o'clock this morning.

All in all, I do believe we dodged the bullet today. While the heavy rains are causing flooding in multiple locations across the Upper Cumberland and there was tree and property damage near Baxter, we could have  seen an even worse situation had the sun shined during the afternoon. The heat would have destabilized the atmosphere to the point where we would have had multiple tornadoes like our friends in Mississippi and Alabama.
*Latest Local Forecast*