Sunday's Forecast and Much More

Expect a high of 88° under partly sunny skies for this Sunday afternoon in Cookeville, TN. We cannot rule out a stray shower or thunderstorm. If we do see rain, it'll mark the first in six days. There is a great 'Did You Know' section near the end of this post.

WARMING UP:
This morning's low was 64.6°. It was the first time since last Tuesday that our low was warmer than 63°. I expect the warmer lows to continue as we're being influenced by a more southerly pattern. We're seeing our high temperatures increase the last couple of days. I expect that trend to continue all week.

SLIGHT SHOWER CHANCES EACH DAY:
We'll include a slight chance of a shower or thunderstorm each day through the 7-day forecast period. Highs will be in the upper 80's at least through Thursday with a slight moderation for the upcoming weekend and a return to sunny skies and cool nights.

HUGE INCREASE IN RAIN THIS SUMMER:
I found an interesting map posted on Facebook by the Nashville Forecast Office of the National Weather Service. The map depicts our summer rains (June through August). Just in case you are wondering our average rainfall for June to August is 13.42". I did a quick calculation that shows we had a 79% INCREASE in rainfall during those three months when compared to normal. 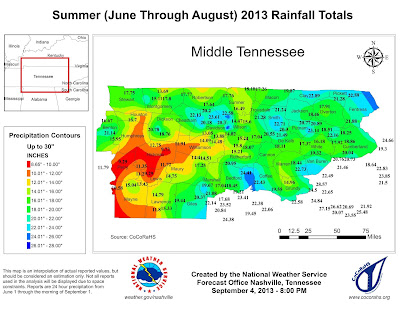 
GOT QUESTIONS?
Each time I post on this blog, I give you ways to connect with me below. I'm happy to answer your questions about all sorts of weather topics.

at 9:21 AM
Email ThisBlogThis!Share to TwitterShare to FacebookShare to Pinterest
Labels: did you know, forecast, rainfall