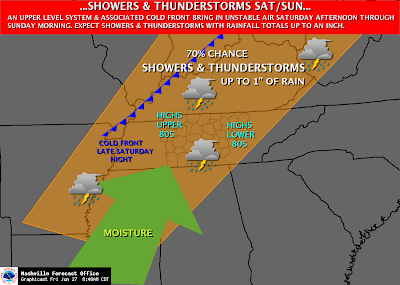 LATEST THOUGHTS
An approaching front from the northwest will fire big storms this afternoon and evening across Tennessee. Here in the Cookeville area, our greatest threat will be mainly this evening. That being said, we cannot rule out passing storms this afternoon. Damaging winds along with frequent lightning strikes are the very possible. The graphic above is courtesy of the NWS-Nashville.


RAINFALL REPORT
Yesterday's rains brought us .23"...that is the most since June 14th and only the 7th day this month we've had measurable rainfall. A station just a few miles to my ESE reported .35 inches....interesting how he had 50% more rain yesterday than I did.

Speaking of last year, I ran a rainfall comparison report. From May 22nd through June 28th of THIS year, we've measured 2.88" of rainfall....using the same period from last year, we measured 2.36" of rainfall. Now, you may ask why that time frame?....I signed up for CoCoRaHS and began reporting on May 22nd last year. Also, last year was record-breaking dry weather. Of the 2.36" measured in that time frame from last year, 2.02" fell in one day (on June 20th)...so it was extremely dry.
at 8:27 AM
Email ThisBlogThis!Share to TwitterShare to FacebookShare to Pinterest
Labels: forecast, rainfall