Another Hot One Ahead

Storms arrive later this week through the weekend..more on that in a bit.

ANOTHER HOT DAY:
Most of us are in the upper 60's across the Cookeville area and the Upper Cumberland this morning. Expect highs to reach into the upper 80's for our region with some folks pushing the 90° mark. Our record is 91° from 1936..I don't think we'll get there today. For Thursday, we'll see a high of 86° under a cloudy sky and a 30% chance of thunderstorms.

Then storms arrive for the Friday through Sunday with our best chances coming on Saturday. Temperatures will trend downward from the 80's on Friday down to near 70° for a high on Sunday.

TN WEATHER HISTORY FOR MAY 11

2003 - An pre-dawn severe weather outbreak produces six tornadoes across the Nashville metropolitan area. Two of the tornadoes (Franklin and Walterhill) are rated as F3, and produce considerable damage. The other four twisters are rated F1. Amazingly, there are no injuries. This is the 9th largest tornado outbreak in Middle Tennessee's history.

1894
A six inch by eight inch gopher turtle, encased in ice, fell from a thunderstorm at Bovina, MS.

1953
An F5 tornado smashed downtown Waco, TX. Hundreds of buildings and thousands of cars were demolished. Many homes were leveled, and 114 people lost their lives along the 23 mile path of the tornado.

1970
An F5 tornado struck the city of Lubbock, TX killing 26 persons, injuring more than 1500 others, and causing $135 million in damage. It was the most destructive tornado ever up until that time. The twister hit a 30-story building in downtown Lubbock, twisting the structure and blowing out all the windows, but leaving it intact. The building still stands today and a photo from 1970 is below. 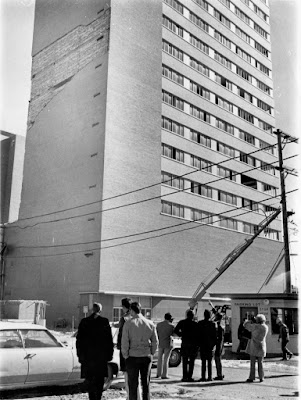