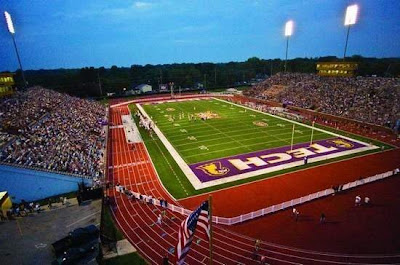 The Tennessee State High School Football Championships (TSSAA website) are being held right here in Cookeville at Tennessee Tech University's Tucker Stadium. The 2A, 4A, and 6A champions will be decided today and the weather couldn't be more splendid for early December as we expect highs to reach 62° this afternoon with a nice south southwest wind of just 5-10 mph.

On Friday, Wayne County completed a perfect season with a 27-14 victory over South Pittsburg while Christian Academy of Knoxville defeated Milan 49-14 and in the nightcap, Henry County also finishes undefeated with a 17-14 victory over Powell in one of the best high school football games ever in front of a near-capacity crowd.

Today, it's Dresden vs. Friendship Christian in the 2A game, Maplewood vs. Greeneville in the 4A game, and the big one in 6A pits Whitehaven out of Memphis against legendary powerhouse Maryville. Both teams are undefeated this season and both teams dismantled two of the better teams in the state semi-finals on their way to the championship game in Cookeville.

The rain holds off today, but clouds roll in tonight and a slight chance of rain for Sunday, high 59°. Rain continues, Sunday night, Monday, Tuesday, and turns to a rain/snow mix Tuesday night and all snow Wednesday. According to the Hydrologic Outlook, the potential is there for 3-5 inches of rainfall with some areas possibly receiving more. With the ground already wet from the 4.57" last week here in Cookeville, there is a potential for quick flooding during the next several days.