We'll be undergoing a bit of a change in the pattern although the highs will push right to 100° once again across the Cookeville area. This could be day #5 in a row. I was amazed by all the haze yesterday while traveling to and from Chattanooga. 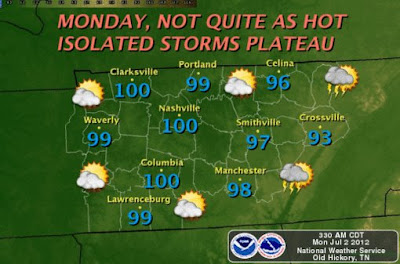 BOOMERS AND RAINDROPS:
Did you hear the thunder last night? Did you receive rain? Parts of the Cookeville area did and parts did not. We received a trace of rainfall here last night at MY WEATHER STATION LIVE!

PATTERN CHANGE INCLUDES RAIN:
As promised above, the pattern is changing. We'll still have the heat to contend with but there is an increased chance of showers to start out Independence Day week. I think you can count on a 20-30% chance on Monday, Tuesday, Wednesday, and Thursday. As I stated, it'll still be hot with highs mainly in the mid to upper 90's after today's high near 100°.

SHADES OF COOLER WEATHER AHEAD?
Let's not get too excited BUT there are hints (and I say HINTS) of a possible cool down out in the 10-15 day range. We are still right in the middle of summer so any cool down would be short-lived and not very cool. After temps in the 100's, highs near 90° would be a welcome relief. We'll keep an eye on this possibility.

at 6:56 AM
Email ThisBlogThis!Share to TwitterShare to FacebookShare to Pinterest
Labels: forecast, heatwave, rain

We got a pretty decent shower here in the Algood patch last night. A couple of brief heavy rains, and a steady shower of twenty minutes or so. Lots of cloud to cloud lightning. Cooled off a bit.