The Ever Changing Forecast

Morning Talk
We're stuck in the deep freeze once again.  Morning lows were in the upper teens around 3 am, but have since risen into the middle 20's as I write this at 7:25 a.m.  Conditions are cloudy and precipitation is falling in the lower atmosphere...BUT, isn't hitting the ground.  Dewpoints are just a little too low for it to 'survive' to the ground.

You Wimp!
Speaking of deep freeze, had a friend hit on me on Facebook about being a wimp, he lives in Minneapolis where they've not seen temperatures above the teens since Monday!

Weather Discussion
Back here in Cookeville, you can see on the map above a cold front will steam roll through the central U.S. heading our way.  It will bring cold air for our Sunday (highs only in the middle 30's).  We do expect a more southerly influence to take over and raise temperatures for Monday (mid 40's) and Tuesday (above 50°) with rain chances again.  Behind that, we may see more snow. 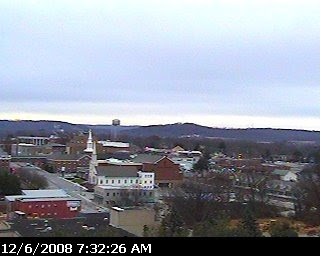 No flurries flying just yet on the Cookeville Webcam , however, we may see some today!  Thanks to Tyler Smith and the Cookeville/Putnam County Emergency Management Agency for this webcam and their weather page.
Weather Talk
Love to talk about the weather....join the fun folks over at TennesseeWX.com
at 7:24 AM
Email ThisBlogThis!Share to TwitterShare to FacebookShare to Pinterest
Labels: cold, forecast, webcams

Thanks for using the Spottercam and posting the images on your web site.

Thanks for commments!! I enjoy the Spotter Cam...and so do my readers.