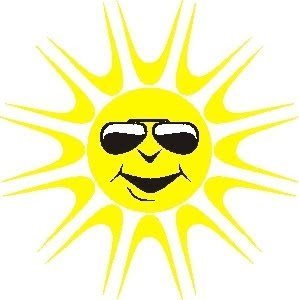 **SUNDAY MORNING SUNSHINE**
We awake this morning with warm sunshine. Expect another hot day with highs around 88° this afternoon and I cannot rule out a thunderstorm or two in our area. Low of 70° tonight with a slight chance of rain. Chances increase to 50% on Monday with highs in the middle 80's.

**TROPICS VERY ACTIVE**
In the last 24 hours, we went from one tropical storm to three! Ana, Bill, and Claudette (officially still called T.D. #4) are or will be named storms. First, Claudette is just off the west coast of Florida and is expected to gather more strength and turn to the NNW. On this track, it should affect the Florida and Alabama gulf coasts by early Monday morning. A tropical storm warning has been issued for those areas. T.S. Ana is churning in the Atlantic and is headed toward the Leeward Islands. Finally, T.S. Bill is in wide-open waters. The thinking now is Bill will re-curve toward the northern Caribbean and affect the east coast of the U.S.

Weather History for This Date
**2007**-In the midst of one of the worst droughts in Middle Tennessee's history, the temperature at Nashville climbs to 106 degrees, setting a record high for the month. It is only the fifth time in Nashville's history that this mark has been hit. It is the fifth consecutive day with 100+ degree readings -- the 9th in the last ten days -- and also the twelfth consecutive day of at least 99 degrees. Waverly sets a new all-time record high with a 106-degree reading, and Linden ties its record high at 105.


Fun Weather Site of The Day
Today's FWSOTD is called STORM PULSE. With Storm Pulse, you can track tropical systems like a professional. They are so many great tools on this site. One of my personal favorites tells you how far the storm is from to a point on the map. Another favorite is what the expectation of the storm's strength will be over a certain period of time. Check out Storm Pulse today!

Through the first 15 days of August, daily high temperatures are 2° below normal.

I'm also on Twitter and enjoy adding people to my 'following' list and invite you to 'follow' me. Twitter is a great way to keep up quickly!
at 7:48 AM
Email ThisBlogThis!Share to TwitterShare to FacebookShare to Pinterest
Labels: cookeville almanac, cool sites, forecast, tropical, weather history

Stormpulse is awesome, a great tool and fun to explore. Nice that they have viewing options you can turn on/off and overlay. They just need to include water temps on the tracking map (an important factor in estimating storm development!)