Becoming mostly sunny today (after morning fog lifts - see webcam shot below) across the area with highs in the mid 80's. A northwest wind around 5 mph this afternoon. Overnight, a cool and comfortable evening with lows right around 60° and again areas away from the city of Cookeville will be cooler. 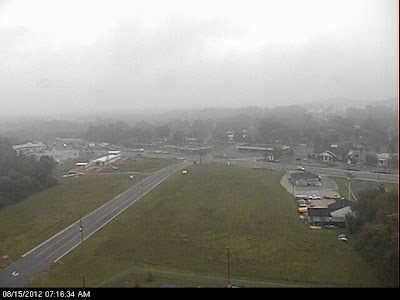 On Thursday, it'll be a mostly sunny day with highs in the upper 80's as the wind turns more southerly. We'll see shower chances develop on Thursday night along with cloudy skies. A low in the upper 60's. Showers and thunderstorms are likely on Friday with a high in the lower 80's. Chance of rain is 60%. The rain and thunderstorm chances hang on Friday night.

The weekend forecast is for a slight shower chance on Saturday morning and then becoming a mostly sunny day with highs near 80°. Mostly sunny on Sunday with highs in the low 80's. Lows this weekend will be in the upper 50's.

The above graphic shows the shortfall or deficit in rainfall for 2012. As you can see, we're still down by a significant amount. Thankfully, however, we have had some good rainfall (almost 9") in the last 30 days to cut into the shortage.

So far, high temps for August have been running a couple of degrees BELOW normal. Precipitation is significantly ahead of normal. All in all, August is a cooler, wetter month. Something we've not seen in quite a while.