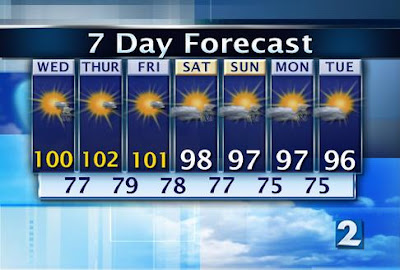 The hot weather in Tennessee marches onward. We've almost gotten used to the fact of being near 100 that it is not even the lead story on the news anymore! As you can in the 7-day above (provided by NashvilleWX.com), the lowest high temperature through our period is 96°.

UPDATE ON DEAN
Dean continues to make his way from the Bay of Campeche toward a second landing on the eastern Mexican coast. The projected path has him crossing into Central Mexico and then being downgraded to a Tropical Depression. These can dump tremendous amounts of rain. Just ask the folks in Virginia in 1969 when Hurricane Camille has supposedly sputtered out as she turned eastward after going through Mississippi and Tennessee. The folks in some parts of Virginia received up to 31 inches of rainfall from her remnants. Amazing!

COCORAHS
We have a couple of new states coming on board. New York and North Carolina kick off on September 1st. Also, Alabama is slated for the late fall. Go to the CoCoRaHS site for more information.
at 9:08 PM
Email ThisBlogThis!Share to TwitterShare to FacebookShare to Pinterest
Labels: cocorahs, forecast, hurricanes, nashville wx