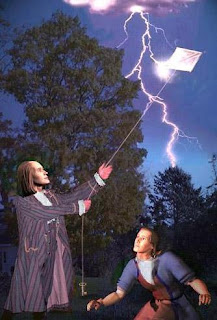 It appears this powerful heatwave is about to break. More on that in a moment. Also, today in weather history is when Ben Franklin did the experiment with the kite, key, and lightning.

MUCH MORE ON THE HEAT:

HEATWAVE WRAPPING UP BY SUNDAY?:
We will see a chance for isolated thunderstorms over the next few days. Expect highs in the 90's today and Saturday, but we'll back off into the 80's Sunday through Thursday of next week with night time lows in the middle to lower 60's. Not all of us will see rain, but those who do will see their temperatures back off by more than 10°....

On June 10, 1998...
A hailstorm at Smithville produces golfball-size hail. Seventy cars and 17 homes are damaged. Wind driven hailstones cause holes in the siding of homes. Damage is estimated at $750,000.
On June 10, 1999...
Lightning strikes a substation on Eddy Lane in Franklin. The lightning damages a breaker, insulators, and lightning arrestors. Eight thousand customers are without power.